Do you know Montalbano? 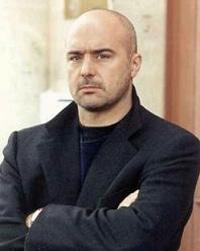 The Police Commissioner Salvo Montalbano is the protagonist of a successful series of novels published by the Sicilian writer Andrea Camilleri. The novels are characterized by the use of an Italian language strongly contaminated by elements of  Sicilian dialect and beautiful Sicilian settings.

Montalbano works at the police station of Vigata,  imaginary  town on the sea in the province of Montelusa. His narrowest collaborators are his deputy Domenico Augello, a playboy. Salvo affectionately calls him Mimì; then there is the hard-working Inspector Fazio, very efficient and always in search of every kind of signs;  the agent Catarella, a bit stupid but very nice telephone operator. Montalbano has a fiancée, Livia, she lives in Boccadasse, near Genoa, occasionally she takes a plane and goes to Vigata to spend a couple of days with Salvo arguing all the time.

Montalbano is a Commissioner different from anyone else, he has a great talent and an innate ability to clear up intrigues that seem to be without solution. Nevertheless he is not unharmed from macroscopic defects and caricature as his weakness for the good kitchen and the almost gloomy attachment to his world. He is unpretentious and honest and doesn’t care who he offends when he’s intent on solving crimes. With great ability succeeds in disentangling in the administrative machine, serving it with great loyalty and without skimping fierce criticisms towards his colleagues for their behaviors. He has an ambivalent personality: on one side the spotless official of Police and on the other the man with his vices and virtues.

Andrea Camilleri’s Inspector Montalbano has become a phenomenal success whose adventures have been translated from Italian in many languages: German, French, Japanese, English, Dutch, Portuguese, Danish, Turkish, Finnish and Hungarian.

The first novel marking the debut of Montalbano is: The Shape of Water.

Luparello, a leading politician, dies in his car in a kind of open-air brothel on the outskirts of Vigata, his head thrown back and his trousers lowered. The coroner says he has died of natural causes while making love to someone.

Why should a citizen, apparently upright,  take such a risk on the eve of his success?

Montalbano becomes suspicious when a powerful politician, a judge, and a bishop all apply pressure to quickly close the investigation.

Near the crime scene is found a precious necklace and a bag that belong to Ingrid Sjostrom.

Montalbano discovers that it was all staged by Rizzo, a political opponent.

Luparello was having sex with his nephew and lover Giorgio at his beach house. The nephew goes on panic and wants to protect his uncle from the embarrassing circumstance of his death. He doesn’t trust himself to be able to move his uncle’s body so he calls his uncle’s friend and political crony  Rizzo, for help. Rizzo assures Giorgio he will take care of it and then instead of helping attempts to take advantage of the situation. He  betrays his friendship with Luparello using his death to gain leverage over his political opponent, Secretary Cusumano. He tries to cast Cusumano’s Swedish daughter-in-law Ingrid as Luparello’s lover, implicating her in his death at the scene of the open-air brothel.

The beauty of this novel is in the suggestion of place: the manner in which the people live; the background of endemic political corruption and the ways in which honest men like Montalbano have evolved to live with it; every thing is presented with ironic and unfussy humour.

The characters give the impression to walk from real life into the pages of the book, and when they leave, we can imagine them returning to their every day lives.

Latest posts by MaryannM (see all)

2 thoughts on “Do you know Montalbano?”